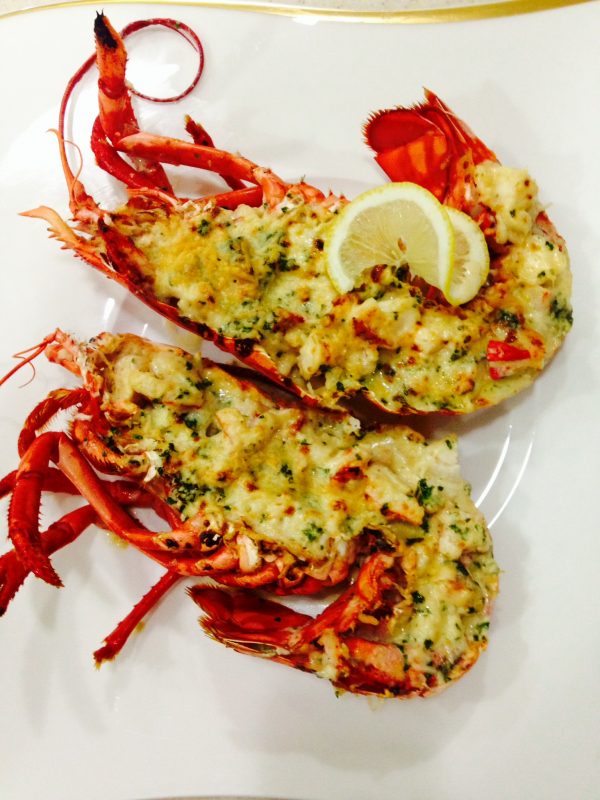 This dish is a firm favourite for me at winter time. With its luxurious creamy scent escaping the kitchen, it’s bound to be a hit. I would recommend using Swiss Gruyère cheese and a rich buttery white wine. Normally I would my make own stock but a good quality shop-bought fish stock will save time and make this dish even more simple to prepare.

The most humane way to dispatch live lobster is often disputed. I believe head first into boiling water is the quickest way. Make sure your pan is plenty big enough and if you aren’t sure, cook the lobster one at a time. Weigh each one first and the cooking time depends on the size. For a lobster of 1.5Ibs cook in boiling water for 15-20 minutes. For a lobster of 2-3Ibs cook for 20-25 minutes. The shell should be bright red and the meat white through, not translucent.

Once the water has been brought to the boil add the aromatics, peppercorns, parsley, thyme, carrot and onion, and take the lobster by the middle and place in the boiling water head first. Cover to maintain the heat and pray you don’t come back as a lobster in the next life!

Once the lobster has cooled and the meat removed I like to save the body shell for presentation and add the shells of the claws to the sauce for extra flavour.

To extract the met from the lobster, first remove both the claws. Then take a chef’s knife and slice from head to tail right through the shell from the underside. Remove the tail meat and cut into large chunks. Clean the shell of all the meat in the head. Wash the body shell well and dry. Now preheat the grill to 250°.

For the claws use the blunt side of the chef’s knife and, obviously not using your hand, break the shell by bringing the knife down on the shell. Remove the meat and chop into chunks. Return all the meat to both sides of the washed shell.

When the sauce is reduced, add the mustard, lemon juice and test the seasoning. Stir in half the cheeses. Pass through a sieve and discard the claw shells.

Place the meat filled shells on a baking tray and spoon over the sauce evenly between all 8 lobster halves. Sprinkle the cheese on top and grill for 4 minutes. When the smell is just too good and the top is bubbling and golden brown remove and sprinkle with the remaining parsley.

Garnish with rocket and lemon and serve.

Katie is a very passionate chef with 6 years experience cooking in both commercial and private kitchens in the UK, Switzerland, Italy and New Zealand.  Her appreciation of organic and fresh flavours started at an early age and after finishing university Katie decided to turn her passion into her profession.